The trucks displayed digital messages as the fleet drove around the capital, which read ‘Goodbye Boris,’ ‘It’s Hard To Keep Up’ and ‘Hello Boris?’

The messages sent by Paddy Power reflected the odds of former-Prime Minister Boris Johnson making an unlikely comeback to Downing Street, only weeks after being forced to resign following a slew of political scandals.

Currently, Johnson is priced at 5/2 to be the next Prime Minister of Great Britain and Northern Ireland – odds which started the day at 14/1 and tumbled into the evening of 20 October. 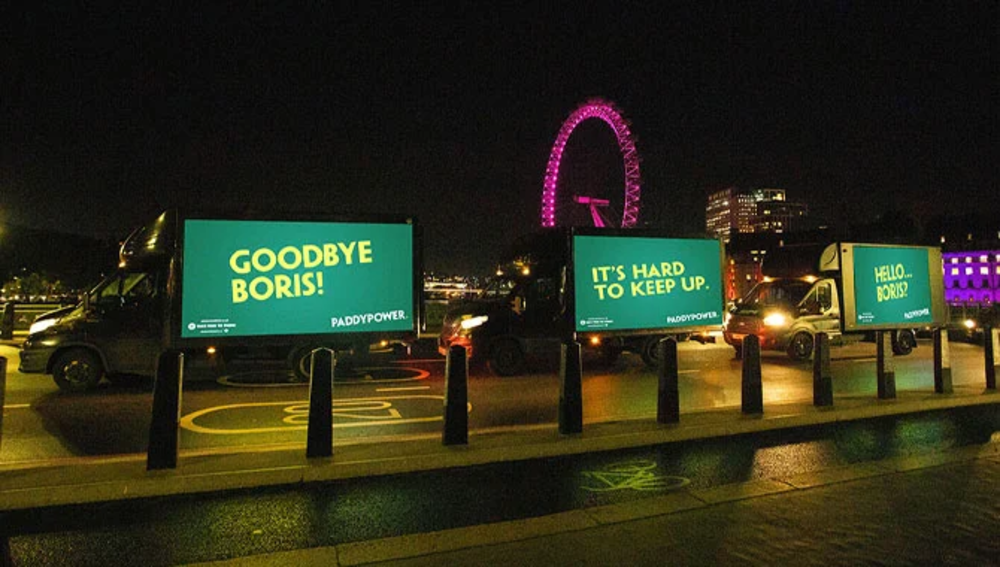 However, despite Johnson’s ever-increasing chances of being chosen by the Conservative Party as its next leader (again), former-Chancellor Rishi Sunak remains the heavy favourite to become the third Prime Minister of 2022 – with Paddy Power odds of 8/13.

Meanwhile, the rest of the political field is made up of senior Conservative figures Penny Mordaunt and Defence Secretary Ben Wallace. Mordant is currently sitting at 7/2, while Wallace is in at 33/1.

But the most surprising odds being offered by Paddy Power (given the brand’s reputation, perhaps not so surprising) is on the – now famed – lettuce that outlasted Truss’ premiership, which is currently priced at 500/1.

The leadership contest is expected to be complete by Friday 27 October, with 100 nominations needed to enter the race to be Prime Minister – meaning, in all reality, only three people could have a chance at running for office.