PokerStars, the world’s largest online poker room, has confirmed pokerfuse that they will be launching in its only second US state after New Jersey “next week.”

“We are very excited to be bringing our most popular brands to Pennsylvania in the next week, subject to regulatory approval. Stay tuned for more details!” said a PokerStars spokesperson to pokerfuse on October 30.

While the company did not share the exact dates for the launch, based on the information revealed to PlayPennsylvania by the State gaming regulators, PokerStars is slated to soft launch in conjunction with its licensee Mount Airy Casino, on Monday, November 4.

“We have staff prepared to initiate and oversee a test launch this Monday of another online casino gaming site, this one licensed under Mount Airy Casino and their suite of casino-type games,” a Pennsylvania Gaming Control Board (PGCB) spokesperson Douglas Harbach told PlayPennsylvania during today’s PGCB scheduled meeting.

“At this juncture, it would include the testing of a poker game. The caveat is always that if issues come up, then the beginning of the testing could slide,” Harbach added.

How Long Will The Testing Period Last?

Before going fully operational in the state, PokerStars will have to go through the testing period that is expected to last two to three days.

During this period, PGCB will carry out various tests including testing the functionality of certain services linked to the player experience including geolocation services, payment processing, and responsible gaming measures.

Assuming the testing period goes well, PokerStars could be given green light to go fully live in the next week itself. 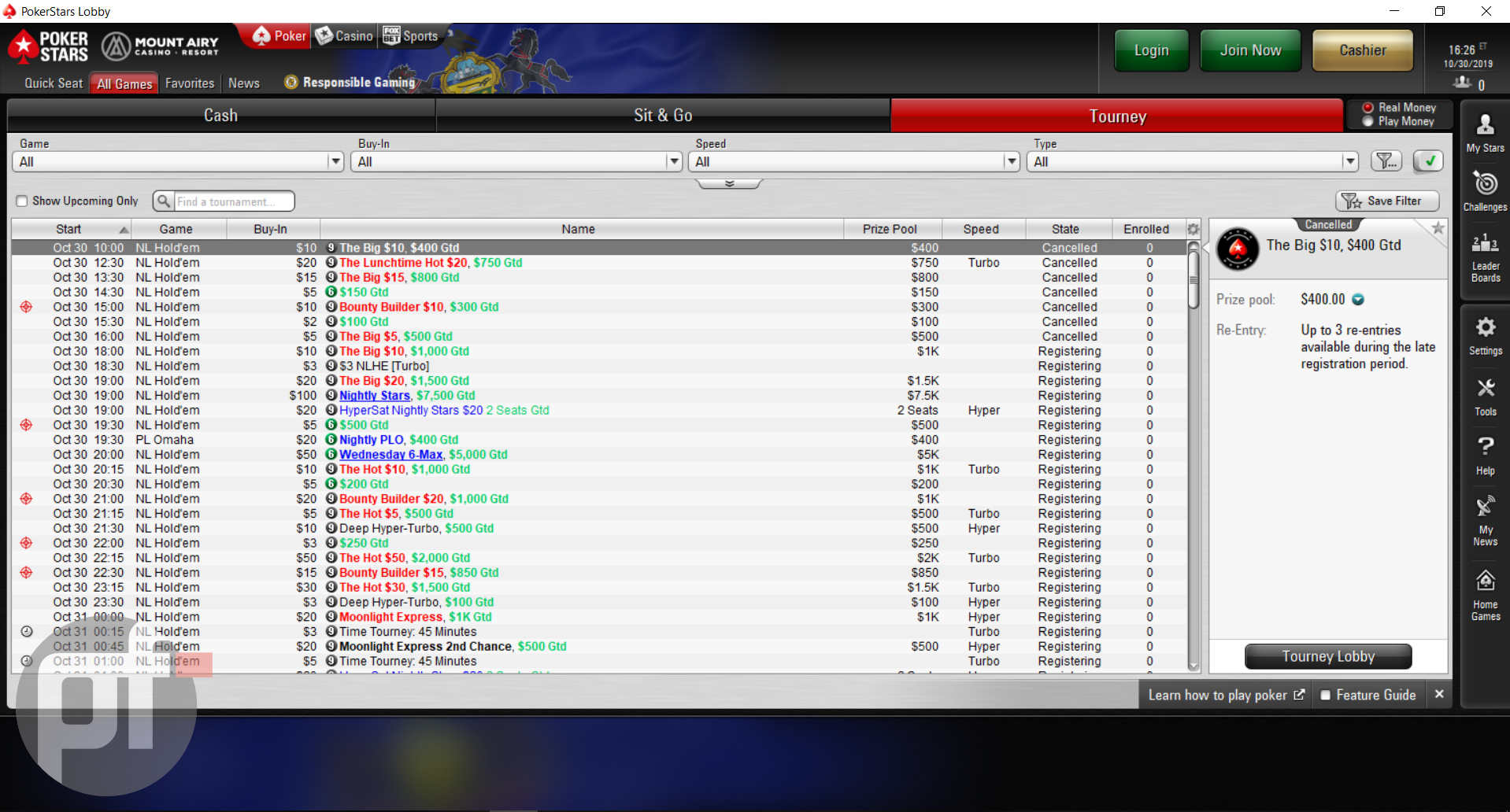 What Games Will Be Available During The Soft-launch?
Players during the testing period will have access to online gaming for only limited hours and only a few games type will be available.

Based on the information we have gleaned from the PokerStars PA platform, which is currently believed to be in internal alpha testing, players in Pennsylvania will be able to enjoy cash games, sit & go’s and tournaments for a limited period of time during the test period.

However, it appears that Spin & Go’s, the operator’s ultra-popular lottery-style game format will not be initially available at the launch. Notably, Zoom games (PokerStars’ fast-fold format) will also be missing from the game offerings.

Cash games are likely to be available at various stakes starting from the $0.01/$0.02 and going up to $100/$200. They are likely to adopt the traditional lobby system just like in New Jersey, allowing players to choose their own tables and seats.

Sit & Go’s are expected to come in various buy-ins starting at $1, with games available in only heads-up and 6-max format.

Tournaments are expected to be available in various formats including knockouts, time tournaments, turbos and hypers.

Casino games are also likely to be integrated into PokerStars platform at the time of the soft-launch period.

How Old Do I Need To Be To Play Online Poker In Pennsylvania?
In Pennsylvania, players must be at least 21 years old to play at regulated online poker and casino sites.

Will I Be Able To Play With The Rest Of The World?
Regulated online poker will be ring-fenced at first, and PA players will only be able to play against those located within the state.

Will I Be Able To Play With Other US States?
In the US, online shared liquidity is allowed only between those states that have joined the Multi-State Internet Gaming Agreement (MSIGA). Currently, only three states (Delaware, Nevada and New Jersey) have joined the agreement. As a result, at the time of launch, operators will not be able to allow players in Pennsylvania to play at the same ring game tables or in the same tournaments as their customers in other states.

Will Pennsylvania Join the US Shared Online Poker Player Pool?
It is expected that Pennsylvania will join the Multi-State Internet Gaming Agreement (MSIGA) in the future. Last year, the PGCB was in talks with the New Jersey regulator to join the US player pool.

However, the PGCB in September 2018 stated that it cannot predict the likelihood that Pennsylvanian online poker operators will be able to combine their player pools with those in New Jersey, Nevada, and Delaware.

Pennsylvania has a population of nearly 13 million—more than the combined population of Delaware, Nevada, and New Jersey. Should Pennsylvania join the agreement, it will be a huge boost to the US regulated online poker market as the player pool will likely to double.

Which Other Online Poker Rooms Are Expected To Launch In PA?
Alongside PokerStars, WSOP.com, 888Poker, and partypoker are also among the likely candidates that will be offering online poker to PA players. Partypoker’s parent company, GVC Holdings, is still waiting for approval for its Interactive Gaming license from the state regulators and is unlikely to launch this year.

Hollywood Casino who was among the first to launch iGaming in the Keystone State has also shown interest and is “hoping to have poker integrated by the end of 2019.”

What About Unregulated Sites?
Unregulated online poker rooms accepting players based in Pennsylvania are likely to pull out from the state once the market goes live.