Malta.- July 28, 2022 www.zonadeazar.com Pragmatic Play, a leading content provider to the iGaming industry, has expanded its Live Casino offering through the launch of the ingenious Boom City.

Boom City showcases a 6×6 grid, with players placing bets across the 36 squares, and wins being awarded through the roll of two dice. These can grant one of three bonus games, award an instant cash prize and enhance winnings
further through a Power-Up feature where squares are randomly multiplied.

Throughout Boom City, instant cash prizes are displayed on the game grid – Bronze prizes award a 1x multiplier, Silver denotes a 2x prize, and Gold represents a 5x win while landing on a bust symbol results in an instant loss. 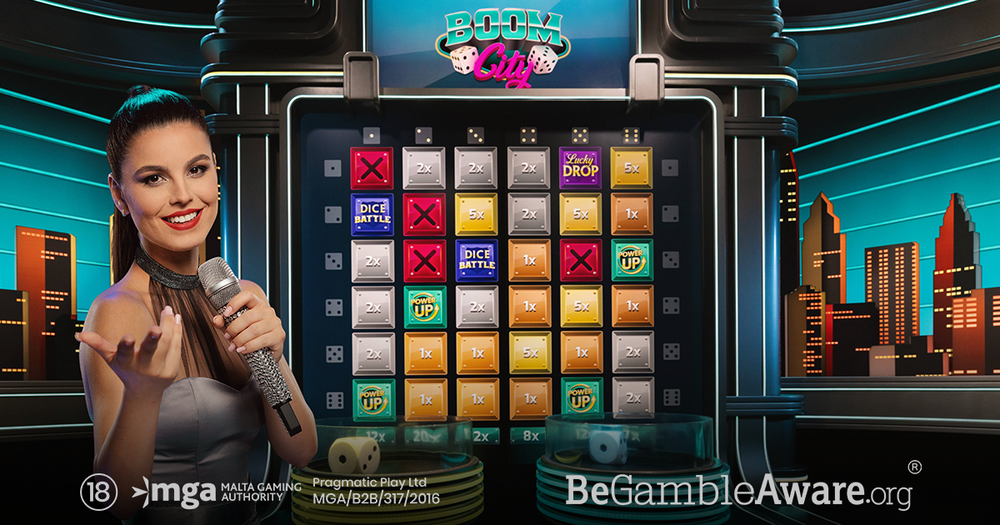 Boom City’s array of bonus games enhances its base game, where Boom or Bust challenges players to advance through levels with incremental risk and rewards. Also present are three features, including Level Up, Safe Value and
Hyper Jump which increase the multipliers on offer or aid in the progression of additional levels. These revolutionary mechanics allow players to make decisions throughout play, increasing direct player engagement.

When players land on a Dice Battle square, they are provided with a choice between two battling dice, where each side will have three rolls to gain as high a number as possible, and the winning side will award the total of their
winnings plus the losing dice’s cumulative amount.

The Lucky Drop bonus round provides six rolls of a dice with the player choosing one of six columns, and these are populated with increasing multipliers for each successive roll correlating to their chosen number.

Boom City’s popular game show format will be captured by 4k cameras using low streaming latency, with Pragmatic Play providing users with a detailed bet history and the opportunity to chat with an engaging host, along with
other players and live support to create an appealing and entertaining experience.

Yossi Barzely, Chief Business Development Officer at Pragmatic Play, said: “Boom City offers various bonuses, features and outcomes that will appeal to both Live Casino fans along with those that typically enjoy our wider offerings.

“Its highly entertaining gameplay provides players with decision-making opportunities that further increase engagement and also offers a huge max win of 20,000x, all played out in a custom-built set that combined create a unique, fun and easily consumed experience.”

Pragmatic Play currently produces up to six new slot titles a month, while also delivering Live Casino, Slots and Bingo games as part of its multi-product portfolio, available through one single API.